A LOOK AT THE FILMS OF JOSÉ LUIS GUERÍN 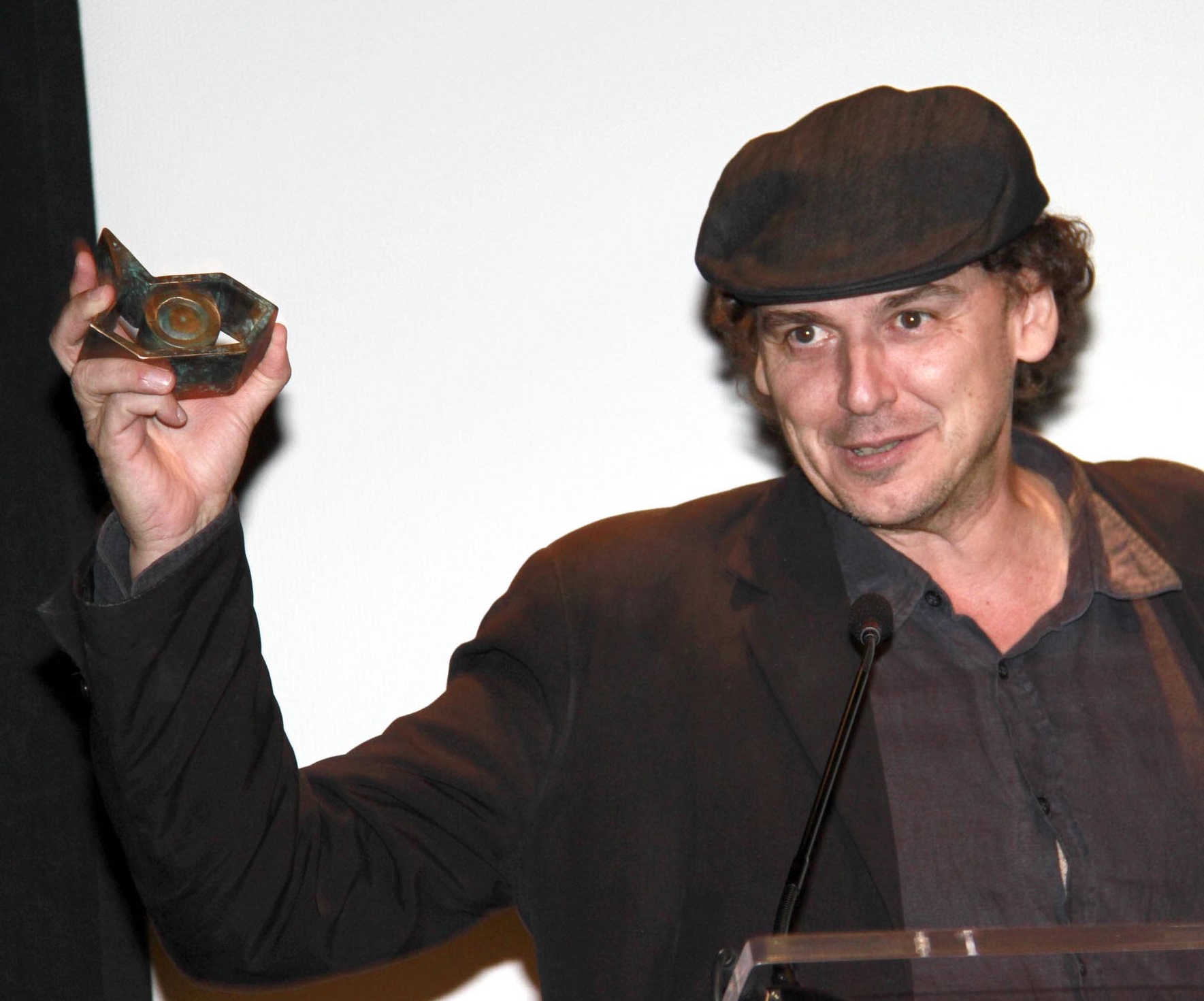 The intimacy of the observed

The sixth edition of MiradasDoc gives the Personal View (Mirada Personal) Prize to José Luis Guerín. A heterodox film-maker who has converted the investigation of time in images into a reflection around which all his work revolves. That time in which sculptures are made, according to Tarkovski and which is the obsession of creators who work in cinematographic language.  Those images in time constitute the basis for documentary cinema, the memory that Sartori defined as Homo Videns, a cinema in which Guerín has left some of the most valuable works in the cinematography of this country over the last few decades.

With the vocation of fleeing stereotypes, showing apparently simple elements, Guerín brings us closer to details which may supply a unique emotion through polished settings of a pictorial original, in the majority of his work. In his most recent films, which the audience at MiradasDoc will be able to enjoy, Guest (2011) and Correspondencia con Jonas Mekas (2009-2011) Guerín has drifted towards a greater spontaneity, towards a certain intentional amateurism, supplying a greater degree of subjectivity in the actions he narrates. He enters the epistolary genre, with a number of filmed letters which are addressed to the independent film director par excellence, Jonas Mekas, and in the intimate audiovisual diary, a kind of travel diary around the world of film festivals. It is in those margins of cinematography that the work of Guerín fits in, independently of the fact that already from the point of view of the most conventional criticism, this genre is despised as a foreign element, beyond the limits of what is acceptable in literature.

The work of José Luis Guerín is a reflection from the frontiers which separate fiction from the documentary, craftwork from the industrial, the intimate image that is proper to photography in the home rather than what is projected in a cinema, the personal from the social. What is to be found in the margins of the canon has taken Guerín from the meta-cinematographic investigation of a work produced by the most classical Hollywood to a filmed travel diary in Guest (2011), the most personal work – taking as personal something intimate, unique, which is his own and almost unconfessable – of the film-maker up to the present. Thus, in his narration, we can appreciate the private matters of images taken in a public space. And the externalisation of images from the private sphere.

The journey as a narrative element

In Guest, he is favoured by that status that the Guest has at festivals held all round the world for the creation of a network of experiences, an audiovisual diary inside that parallel world of red carpets, brilliant prizes and flashes which aim to find a thread which joins the experiences in the different cities where he is invited to present one of his works, En la ciudad de Silvia (2007 – In Silvia’s City). But earlier, the journey to Ireland or to Normandy is also revealed as one of the keys to understanding his vision of each story.

The holy space which he finds for us in Innisfree (1990) conceives the location of The Quiet Man (John Ford, 1952) as a space of memory, which leaves its mark on future generations, which see their past represented in a work of fiction and who internalise it as something of their own.  The reconstruction in memory of a space, a house, in situ, by the children of the time, who are now adults, is marvellous. The children of that Innisfree of Guerín’s seem to see in the characters old inhabitants of the district. They tell the plot in close ups in the manner of the classic documentary interview. Among other narrative pieces, they tell the story of the church, where John Wayne offers holy water to Maureen O´Hara from his hand. Curiously in the same year Luis Buñuel repeated the idea in Mexico during the shooting of Él (1952 – This Strange Passion), the idea of a man’s conquest of a woman inside a church with a sacred element offered in a sinful manner, with carnal contact. It is almost an ethnological documentary with those close ups. The human face is the protagonist, the portrait of that place is also captured for posterity through its people.

The idealization of nobility and of the innocence of a place and of its inhabitants resides both in Ford’s work and in that of Guerín, that concept is also expressed through the children of Innisfree.

John Ford’s empty chair, as a tribute to the director of Irish extraction who conceived his work as a homage to his place of origin. The chair with the director’s name is a sign of ownership. That space, on being filmed, became a possession of the director. First it belonged to John Ford, and now Innisfree also belongs to Guerín.

There is a certain nostalgia for past times in the works of Guerín. A romanticism which clearly impregnates both Tren de sombras and Innisfree. A nostalgia for a present which, once filmed, will leave its mark, creating a legacy of the filmed space within the universe of the recorded image. The idea of a second filming which takes in those shadows and reinterprets them, this time in an intentional manner, comes out in both works. In all Guerín’s work, we can appreciate an enormous fluidity between images and sounds of different times.

The super-imposition of dialogues from Ford’s film which speak of the geographical space of the district over images of windy Innisfree in 1990 bring together the same space at different times, the image and the sound track of the film. They are echoes of a false past which the inhabitants have absorbed as their own, like old neighbours, close relations. The wind appears to bring that past to the spectator.

The shadows of those characters trapped on celluloid, for centuries, those who were actors become ghosts just like the new inhabitants of that space in the cinematographic universe called Innisfree. Those children who were interviewed, who will grow old, or the old people who remember Ford, Wayne and O´Hara who are probably no longer in the Innisfree of our times, in our dimension, but who will live for ever in the 1990 film and in our collective memory they will stand together with Wayne and O´Hara.

There is in Guerín’s work a struggle between memory and history, between fiction and documentary, between classic and contemporary cinema. On that diffuse frontier between genres which he reconnoitres in his documentary En construcción he has elements which related it to Barrio (Fernando León de Aranoa, 1998) just as Innisfree or Tren de sombras may have them in common with El sur (Víctor Erice, 1983).

Recovery of images and sounds for the present (in Tren de sombras or Innisfree as a kind of filmed archaeology) in a direct manner, this discovery of the past is materialised in the works of the Chinaman in Barcelona. Guerín investigates images to extract hidden meanings, buried in the arena of time. What is more, gestures and words are frozen (the “things that are seen and heard”) in the district. The filming implies many hours in which it is the images that dictate the path to follow.

Guerín’s view is a frontal one, patient and alert. Non-intervention in reality, the positioning of a non-interventionist camera which spies actions and reactions to discover the extraordinary within the ordinary. A gesture, an image, a sentence or a look. Discovering the beauty of the fleeting, of that instant recorded on film directly from the lights that make up reality. Details which pass unnoticed before the haste of other views.

It is archaeology again that transports us through the history of cinema to another discovery of the 1950s in Italy, during the shooting of Viaggio in Italia (1953), when the mummified bodies of a couple are found in Pompeii and Rosellini asks to be allowed to film the reaction of Ingrid Bergman and George Sanders. Among our Chinese neighbours, we can find similar gestures before the remains of people buried at their feet.  “Life is so short” says Bergman. The resonance of her words takes us, without intending to, to Chinatown in a silent cinematographic dialogue between works which are separated by little more than half a century.

We can find in his cinema the poetry of naked images, which are quiet and patient, while waiting to be recovered. Vaporous objects which fade away, fade into other images, representing a single space at a different time.

People who become shadows when they film and are filmed. All Guerín’s cinema contains that heavy load of Ubi sunt? That kind of time capsule of each film is a footprint of many meanings left for future generations within each image. With a number of possible stories within each character represented which ramifies the readings of the film.