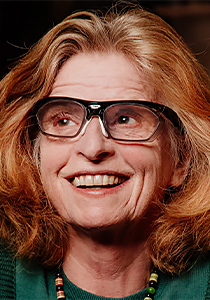 Once I was asked what I would like to have been if I wasn’t a film-maker. I didn’t know what to say. I thought maybe an adventurer or a teacher. But I remembered that when I was little, I wanted to be a tragic actress…

Claire Simon was born in Great Britain, but it was in France where she developed a career full of international awards. Her adventurous spirit led her to study ethnology and to first come into contact with film in the Argel film library, where she did a course on editing and joined the editing team of Dora Et La Lanterne Magique (Pascal Kané,1977). But Simon wanted to further her knowledge and learning, and she enrolled in the Ateliers Varan, founded by Jean Rouch as spaces to train in hands-on documentary making. There she discovered Direct Cinema and directed her first short film, Tandis Que J’agonise (1982)

In the 1980s she edited the film Faux Fuyants (A. Bergala, J.P. Limosin, 1983), included by Cahiers du Cinéma as one of the 10 best full-length films that year. But when her short film La Police (1986) received an award at the Belfort film festival, she took control of her career and in 1989 she directed her first long documentary, Les Patients, awarded the Heritage prize at the Cinéma du Réel film festival. Her evolution as a filmmaker cannot be separated from her social and feminist activism, as made clear in the television pieces Scènes de Ménage, 1992, awarded with the Grand Prix at the Créteil International Women’s Film Festival. Another example of her social stance was her short film Nous, sans-papiers de France, 1997, signed by the community of filmmakers in favour of “undocumented people” alongside renowned names in French cinema such as Tavernier and Garrel.

What is interesting for me as a woman and a feminist is that, although it is the other way around, I can film a description of submission in an exemplary way. Because for women, who have been oppressed for centuries, it is difficult to talk about oppression.

With Coûte Que Coûte (1995) she won an award again at the Cinéma du Réel film festival, just before her first non-fiction work, Sinon, Oui (1997), presented in Cannes. At the end of the century, she produced Ça, C’est Vraiment Toi (2000), a work filmed in the European Parliament with a group of students from the Strasbourg National Theatre. It was awarded the prizes for best fiction and best documentary in Belfort. This paradox defines Simon’s career. Even in her most obvious documentary works, there is a delicate balance between reality and fiction.

I feel comfortable with hybrid films. I think that film is film… after that, I don’t pay attention to the distinction between documentary and fiction.

Turning this fascination for hybrid formats up a notch, in 2002 she filmed 800 Km De Différence – Romance, in which she portrayed the love affairs of her 15-year-old daughter, Manon Garcia (now a famous philosopher and feminist). And, soon afterwards, she decided to film Mimi (2003) a film about the life of a person, getting as close as possible to see if, during the process, she would be able to find romance in real life. In those first years of the 20th century, she ramped up her work with the community of filmmakers in favour of “undocumented people”, while also focusing on fiction, presenting Ça Brûle (2006) and Les bureaux de Dieu (2008) in Cannes, another borderline fictional work and with a stellar cast (Nathalie Baye, Béatrice Dalle, Nicole Garcia).

In Locarno in 2013 she premièred Gare Du Nord, a fictional work in which she draws parallels between our time on Earth and the wandering of people around the famous Parisian train station. Soon afterwards she presented Le Bois Dont Les Rêves Sont Faits (2015), in which the Vincennes Forest becomes a lost paradise, a place to take shelter and invent utopias. This fulllength film, one of the most acclaimed on her filmography, won the award for best documentary in Gijón.

Claire Simon also has a brilliant academic career. Suffice to say she was director of the production department of LaFemis2. It was precisely there that she filmed Le Concours (2016), focusing on her entrance tests and showing the generational clash between the young aspiring filmmakers and the jury members, senior professors who want to (and are afraid to) meet their successors. In Venice, this work was awarded the prize for best documentary, and at another important festival, in this case Berlin, she premièred her next work, Premières Solitudes (2018).

Honouring her talent as a daring filmmaker, in 2019 she filmed a peculiar television series, Le Village, with hints of documentary and suspense. Set in a town in the south-east of France, she mingles the lives of local farmers and filmmakers. Le Fils De L’épicière, De Maire, Le Village Et Le Monde (2020), premièred at the IDFA, is her most recent non-fiction work, finished just before embarking on Vous ne désirez que moi, a book adaptation in which Yann Andréa dissects his relationship with Marguerite Duras.

Claire Simon is of unquestionable standing, and she is sought after by festivals all over the world. She has never abandoned social causes and especially, the feminist struggle. She is a member of the 50/50 group, which seeks to promote equality between women and men and diversity in cinema and in the audiovisual industry.

Claire Simon is of unquestionable standing, and she is sought after by festivals all over the world. She has never abandoned social causes and especially, the feminist struggle. She is a member of the 50/50 group, which seeks to promote equality between women and men and diversity in cinema and in the audiovisual industry.